In a dramatic move, The Gambia College has suspended face to face or normal lectures for its students and switched to teaching their courses online, as the battle against the novel corona virus in the Gambia intensifies.

The suspension has been announced, after the virus infected more than 18 people and killed at least 1 according to official count as of 12th May.

The college in an official circular, issued on 7th April 2020 has come up with an initiative to complete the first term for School of Nursing and Midwifery; start of second semester for School of Public and Environmental Health; start of third term for School of Agriculture, and School of Education will be online. This is as a result of the National Assembly’s extension of state of public emergency across the country for Forty-five (45) days to prevent the spread of the corona virus in the country.

The Gambia College being the first and highest tertiary institution in the country with an enrollment of more than Twelve-thousand (12, 000) students came up with this “good initiative” of going online after consultations with the Ministry of Higher Education, Research, Science, and Technology with other stakeholders for proper coordination of the initiative.

Mr. Omar Badjie, a lecturer at the School of Education under the educational and professional studies department who doubles as Coordinator for the Gambia college portal and online classes has welcomed the online classes initiative whole heartily saying, “it’s a good initiative considering the fact that the world is experiencing a pandemic and other institution are going online, so there is no doubt that it’s a good initiative.”

He said the decision to transit classes is part of an attempt of social distancing, the practice of limiting large gatherings and person to person contact to prevent the transmission of the virus.

In its efforts to make sure that students have their online lectures properly and uninterrupted, the college is making its utmost best to meet the relevant stakeholders in connection to the provision of the internet data. Badjie added that the governments allocated 500 megabytes for all tertiary institution students. He went on to say that after the consultation with the GSM operators in the country all Google sites including the live streaming will be accessible for free to all the students provided that their numbers are recorded in the system and the 500 megabytes that will be provided by the government will be meant for students’ personal research on assignments.

Omar further went on to say that the college has in its contingency plans to retain the online classes even after the pandemic, because they have released that when lecturers are on observations students miss some of their classes, so as a result of that the online class will be retained.

Finally, Badjie concluded by saying that the experience from the online classes will help students implement the full-fledged learning management system, and it will help to expose them to new learning methods. And urged students to be more patient saying that if you want to get the best you must be patient and not to rush in that, interaction and socialization will be effective.

Also speaking to some students Dennis Gibba Advanced diploma secondary year two students shared his views on the initiative. He said that it’s not a surprise to him when the college announced to go online since the World Health Organization (WHO) declared the virus a pandemic.

Dennis said the initiative is a good move considering the fact that other institutions and schools across the country are going online during this pandemic. He said the initiative is very helpful because it’s much better than sitting doing nothing and it will help students to cover up their course as they are provided with a course outline to guide them during the course.

Gibba added that the initiative has exposed him and boosted his ICT knowledge and skills, saying before the initiative he only heard of the Google classroom application, but never interacted with it.

He concluded by urging students to exercise much patience and understanding saying that it is not a personal wish of the Gambia college administration to go online, it’s as a result of the Covid-19 and advised students to be united.

Kaddijatou Sabally a student at the School of Nursing and Midwifery also called State Registered Nurse (SRN) said the initiative is a good one because no one knows when the pandemic will end. She said the initiative will help students to be active as they will be given lecture notes and assignments to interact with during this period.

Sabally is worried that the SRN students will at some point find it difficult as they are into more of practical’s where they will only have three weeks of theory and six weeks of practical. “Students should fasten their seat belts as the world is digitalized and to be more patient,” she concluded. 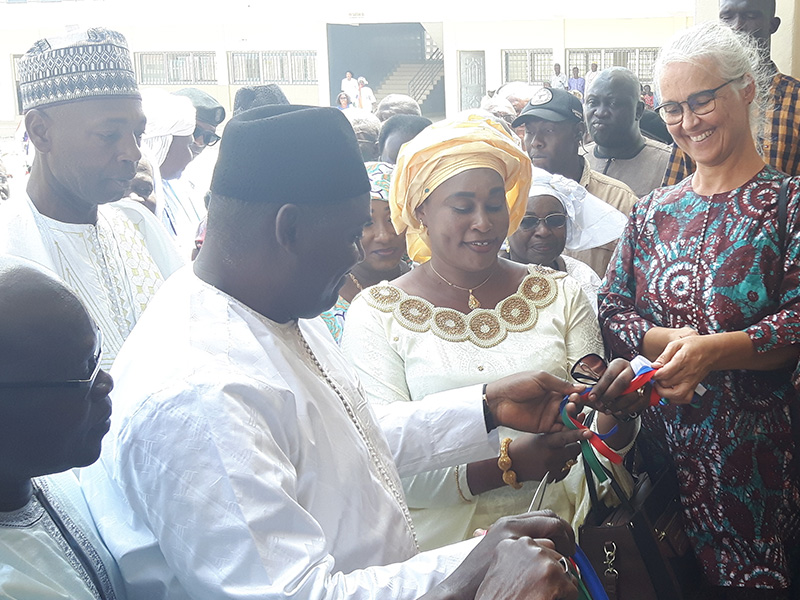